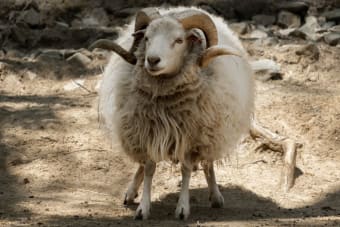 Ruminant animals are mammals that have four-compartment stomachs that allow them to digest grass and other vegetation without completely chewing it. Today, our Brighton veterinarians share more about the digestive system of ruminant animals like sheep, cows, and goats.

Animals that have stomachs with four special compartments are called 'ruminant' animals. Their complex digestive systems allow them to process partially-chewed grass and other vegetation, absorb nutrients and produce energy.

If you've seen sheep or cows grazing in a field, you've probably seen them chewing handfuls of grass, hay, or other vegetation. These animals are ruminants, and their four specialized stomach compartments have microorganisms in the rumen area of the stomach that breaks down their food. This means that they don't have to completely chew the vegetation in order to gain the benefits and nutrition; their unique stomach does much of the work.

There are many animals with this specialized digestive system, such as:

These mammals are quite different in their digestive needs from other domesticated animals like cats and dogs. Factors like the digestive system development, function, levels of bacteria, and pH balance are critical to maintaining the health of cattle, sheep and other farm livestock ruminants.

Based on their preferred diets, ruminant animals can be grouped into three feeding types: concentrate selectors, grass/roughage eaters, and intermediate. The size of a ruminant animal's digestive organs differs by feeding type, which also affects the foods and feeding adaptations. Having the knowledge of which types of ruminants prefer which types of plants can help to plan the best grazing system to implement.

Concentrate selectors include animals such as deer and giraffes. They prefer plants that have a lot of easy-to-digest, nutritious substances like protein, plant starch, and fat. They have a very limited ability to digest the fibers and cellulose present in plant cell walls.

Grass/roughage eaters (bulk and roughage eaters) include many farm animals such as cattle and sheep. Bulk eaters are dependent on grass and other plant materials high in fiber. They have a preference for fresh grass but can digest rapidly fermenting feedstuffs as well.

Intermediate types include animals like goats, which prefer forbs (herbaceous, flowering plants), and browse woody, shrubby plants. As the term indicates, intermediate-type ruminants have digestive adaptations of both grass/roughage eaters and concentrate selectors, and have a limited but fair ability to digest plant cell wall cellulose.

Components Of The Ruminant Digestive System

The digestive process begins here. Ruminants chew and grind down plant mater, mixing it with enzyme-filled saliva before swallowing.

After the plant material is chewed, the esophagus begins waves of muscle contractions to move the food down towards the stomach. It moves in two directions (bidirectional), which allows the partially-chewed plant matter ('cud') to be regurgitated if the animal needs to grind the feed up more.

Ruminant animals' stomachs have four sections: the rumen, reticulum, omasum, and abomasum. Each compartment has a particular job to do, including the storage of chewed food, absorption of nutrients and vitamins, the breakdown of proteins, and aiding in the start of digestion and the dissolution of materials into more manageable pieces.

Also called the 'paunch,' this is the first area of the stomach and is connected to the esophagus. It stores chewed grass and other vegetation and creates balls of cud. It also absorbs nutrients and assists with fermentation and the creation of rumen bacteria and rumen microbes needed to break down and digest proteins. The rumen and reticulum make up the majority of the stomach, as much as 84% in a grown cow.

Frequently called the 'honeycomb,' this part of the stomach is attached to the rumen with thin tissue. Its function is to trap heavy or particularly dense objects such as rocks or metal, or particles of food too large to digest.

With the nickname 'manyplies,' this compartment of the stomach is lined with folds of tissue that are visually similar to a book. These 'leaves' of tissue absorb water and nutrients from feed that has been chewed twice over.

The abomasum, often called the 'true stomach,' is the last part of the ruminant stomach. It is called this because it functions most similarly to non-ruminant stomachs. It is the only part of the stomach lined with glands, which produce hydrochloric acid and digestive enzymes to further help the breakdown of plant material and feed.

Each part of the ruminant stomach is a vital part of maintaining healthy digestion. Anything affecting one section's functionality can have a cascading effect on the digestive system and overall animal health.

Comprising of three main sections — the duodenum, jejunum and ileum — the small intestine carries out most of the actual digestive process. The stomach connects to the duodenum, where the animal's gallbladder and pancreas secrete substances to help digest the food matter. The jejunum is lined with villi, finger-like structures that increase intestinal surface area and helps to further absorb nutrients. Finally, the ileum functions to absorb vitamin B12, bile salts, and any nutrients that passed through the jejunum. A valve located at the end of the ileum prevents materials from flowing back.

The large intestine is shorter in length but larger in diameter than the small intestine and is the last step in the digestive process. It carries out the function of absorbing remaining water and making use of bacteria and microbes to finish digestion and produce vitamines for the anima's growth and health. Finally, the large intestine eliminates undigested and unabsorbed food in the form of waste.

Because the ruminant digestive system has so many stages, numerous things can go wrong and cause complications. If anything inhibits the process, the afflicted cattle may develop an illness, refuse to eat or even risk death.

The most common ruminant digestive system issues are:

Caused by insufficient water intake, some materials that can't be digested (e.g. dense plant matter) can gather and become compressed inside the rumen. This can affect the rest of the digestive system by preventing proper movement.

The specific cause behind this issue is currently unknown, but there are some potential triggers such as molds, mycotoxins, Clostridium perfringens type A or other bacteria like E. coli, excessive dirt, soil, gravel, sand or rocks mixed in with their feed. Usually, HBS is due to a blood clot or a small intestine blockage, causing it to become distended. Prevention and maintaining rumen health are some of the way to lessen the likelihood of this highly fatal disease from developing in cattle.

This is a metabolic disease that directly affects the rumen of the stomach. It can be caused by another illness, high stress in the animal due to overhandling or incorrect handling, and a lack of foraging. This is a cyclical disease, meaning that if it is not treated with successful food and water intake, it could worsen.

Fatty liver disease is the accumulation of excessive fat in a ruminant animal's liver. It is especially common in cows during calving time, and without treatment can affect the healthy development of the calf and milk production.

For information on ruminant digestive health, get in touch with your veterinarian for advice and to make an appointment.

Note: The advice provided in this post is intended for informational purposes and does not constitute medical advice regarding pets. For an accurate diagnosis of your pet's condition, please make an appointment with your vet.

If you need help caring for your small ruminant animals, get in touch with our skilled Brighton veterinary team today! We have the experience you need to ensure that your animals are in the best health.

Horizon Veterinary Clinic is accepting new patients! Our experienced vets are passionate about the health of Brighton companion animals. Get in touch today to book your pet's first appointment.